Why Should You Join A Choir?

Most of the posts so far have been mainly centred on why you should join Yorkshire Youth Choir; we have skipped the essential first question. Why should you join any choir?

From an outsider’s perspective it may seem that there are very few benefits to being in a choir. Sure you might make some friends and it would be a bit of relief from work or school, but in actual fact there are many scientific reasons why a choir should become an important part of your weekly routine.

Not only does singing in a choir teach you transferable skills such as: team work, self-discipline, emotional and analytical intelligence and creativity which will enhance your CV but there has been research carried out which shows strong correlation between choral singing and good health.

The research shows increased release of the hormone oxytocin, this enhances feelings of trust and bonding, perhaps offering some explanation for the intense friendships we have described in previous posts. Singers are ‘bathed in dopamine’[2] which has been associated with feelings of pleasure and alertness as their levels of cortisol (a chemical indicating stress levels) reduces. With the levels of serotonin rapidly increasing very quickly it is becoming clear just why singing is such an addictive activity.

I’m sure you are beginning to question some obvious limitations, why can’t I just sing on my own? Or if it is the togetherness which is important can’t I just join a team sport? Whilst it is true that the previous options would have a positive impact surveys have revealed that those who sang with a choir stood out as experiencing the greatest benefit.[3]

“Studies have found that people who listened to music before surgery were more relaxed and needed less anaesthesia, and afterward they got by with smaller amounts of pain medication.”[4]

“Experts claimed that joining a choir could improve symptoms of Parkinson’s, depression and lung disease”.[5]

As well as providing general feelings of well-being and happiness, being a member of a choir could also offer some serious health benefits, although research is still being done in this area and it is currently unclear as to what extent these benefits can be felt.

“A yearlong study on people with mental health problems, carried out by the Sidney De Haan Research Centre for Arts and Health, Canterbury, has also shown some 60 percent of participants had less mental distress when rested a year after joining (a choir), with some people no longer fulfilling diagnostic criteria for clinical depression”[7]

The improvements to mental health amongst participants appears to be the most consistent result presented across the research I have seen, with some even going so far as to suggest that singing in a choir should be on prescription! From my experience I can vouch that it is very difficult to sing and not feel relaxed, joyous and stress free. Your mind focuses so much on what you are doing; you get lost in the music and are carried away by an explosive and emotive wave.
It seems logical to assume that this benefit is exclusive to happy songs, common sense suggests that singing songs about death and pain would not go far to alleviate symptoms of depression. Yet choirs sing so many songs with death and suffering at their core that it would be reasonable to expect that in reality, joining a choir will not present many of the previously mentioned benefits. However;

“Ohio State music professor David Huron believes singing may generate prolactin, which is released in nursing women, and in tears of sorrow. Prolactin has a tranquilizing, consoling effect, and this is why sad music makes us feel better”[8]

His research not only shows why we may enjoy singing sad music but also illustrates how; in fact, it could be good for us. Furthermore researchers have discovered that singing these songs in choirs may not be just beneficial mentally but also physically, for example: singing Mozart's Requiem showed an increase in s-IgA, an immunoglobulin that enhances our immune defence.[9]
But what if your choral abilities are not amazing? A big reason for people not joining choirs is purely the fact that they think that they can’t sing or read sheet music. Fortunately investigations have been done which revealed that a group of singers will experience the same benefits even if the quality of the vocal instrument is of ‘mediocre quality’[10]
If this is still not enough to convince you that choir is the place to be then maybe this will.

“when people participate in a choir their heart beats become synchronised, and their pulses increase and decrease in union”[11]

It suddenly becomes absolutely clear why such close friendships and unbreakable bonds are formed amongst choirs. Being in total alignment with a room full of people is a sentiment that sounds so beautiful and incomparable to anything else you will ever experience.
If you have read something you like the sound of and are now interested in joining Yorkshire Youth Choir the next set of auditions take place in February 2016 at Northern Ballet in Leeds. Please visit our website for more information about auditions, concerts or how donate money to keep young people experiencing all the benefits of singing in a choir. 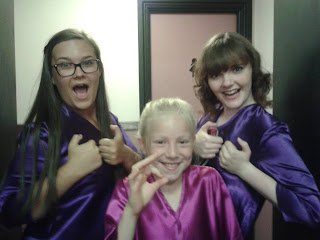 A Message From Yorkshire Youth Choir Members, Past and Present